The physical exhibit, “Collecting at Wesleyan” was mounted in Olin Library and open to the public in Spring 2016.

If you’ve ever been to the Archaeology and Anthropology Collections you might have found yourself wondering, “why is all this stuff at Wesleyan?” A favorite anecdote is that the small room in Exley Science Center contains over 34,000 objects. What you might not know is that Judd Hall was once the Wesleyan Natural History Museum. It existed from 1871 until 1957 when it was deemed irrelevant and the collections were scattered. Some objects were taken by professors and students, only to be returned decades later, while some remained in storage beneath Foss Hill – exposed to many damaging elements. The main strength of the Wesleyan Archaeology and Anthropology Collections is its use as a teaching collection.

But how did it all get here? Some objects were collected and donated by members of the Wesleyan community, others were traded with the Smithsonian in exchange for beetles, and yet others still were collected by missionaries in the nineteenth century. As students who have the opportunity to study and learn from these collections, we are beholden to the history of how they were collected. The two collections focused on in this exhibit are the Melville Collection of Hopi and Tewa material and the Gilbert Collection composed of South Italian Pottery produced in the tradition of Attic Greek vases and a small number of potentially original Attic vases. 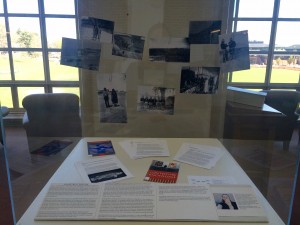 Although the subject matter of the collections is very different, there are general motivations behind collecting that appear in the history of each. The collection of Greek pottery, and the closely related South Italian pottery, derives from a tradition of placing the classical above everything else, artistically and intellectually.

Renaissance and Enlightenment thinkers sought to reconnect to the traditions of the Ancient Greeks and Romans, which they held as paramount. They also considered themselves to be descendants of these cultures, making this desire to reconnect emic. Missing from stories of their collection is the reality that the foundations of Western art and culture have in many ways been shaped and cemented by the efforts of a few influential European men. Ancient Greek art and thought is the foundation of Western art and culture. Looking at the limited scope of the tradition of Greek vases, it was in large part due to the work of Sir William Hamilton that vases became valued art objects. He published two volumes of his vases with the intention to make them more available for public consumption. The resulting interest increased the value of his collection and turned Greek vases into prized objects. 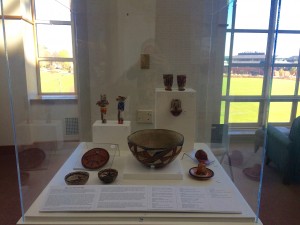 Nostalgia felt by European and American collectors is a large factor in the collection of Native American material. The nostalgia that drove this collecting was etic, meaning that collectors were attempting to appropriate a past that did not belong to them. The etic nostalgia that led collectors to desire Native American material was about escaping the industrialization of the present to return to what they perceived to be a simpler and more natural past. Native American objects are more primarily linked to a history of colonization and oppression. The nostalgia that white collectors feel will always be etic because they can never truly connect with a heritage that is not their own. Along with the attempted appropriation of another culture, the preservation of Native cultures through collecting sought to paternalistically freeze them as they were in their quaint and premodern state.

Specialized production is a facet of nostalgic motivations – a way to possess the past was to purchase it in a form easily understood as from a particular culture. A market formed around the idea of nostalgia. 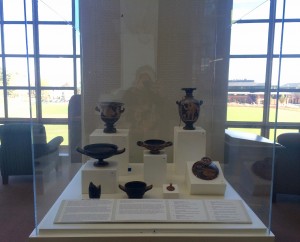 Some of the material in the Melville collection is deemed ‘tourist art’ – made by Hopi craftsmen to sell to visitors to the region. This type of production was common in the Southwest as tourism expanded into the region. Native peoples were able to profit off of these motivations – creating art that was exaggeratedly ‘native’ but not authentic in regards to its use or decorative scheme. South Italian pottery, in a similar vein, sought through specialized production recreating the Attic tradition, to tap into that artistic tradition.

Knowing the collection history and the intentions of the collector are essential to a holistic understanding of interpretive methodologies within museums today. Museums grapple with the often-oppressive history of collecting; illuminating collecting histories is one way to begin to remedy this problem.

To hear more about this project, click here to listen to a radio interview on WESU “All About,” given April 27th, 2016.